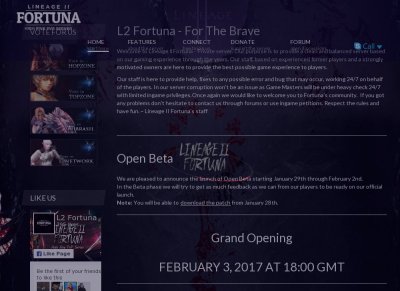 Server Features
Weekly TW Every Saturday
Weekly Sieges Every Sunday
Free Subclass, Sub-Class Max. Level: 85
Class Master Available
Auto Learn Skills
Database Search Engine
Auction System
Champions System(Extra reward)
Full Ranking Manager(Top PvP, Top PK, Top Deaths, Oly Games Won, Oly High Score, Deaths in Siege, Raids Killed, Recommends, Times Hero)
Flawless Geodata and Geoengine
Announcement when raids spawn plus the name of the player and the clan that killed it(Baium has been spawned, Baium has been defeated by Admin of clan GameMasters)
PvP Assist Reward System(Supports also)
Canceled Buffs return in 7 seconds
Maximum Sub classes: 5
Unique Community Board (ALT + B with Every function you need)
Auto Potions: .autopots (CP-HP-MP)
Custom Instances(3 Members required)
PvP Color System(1000/2000/3000/4000/5000/6500/8500/12000/25000)
Special Castle Cloak (Is allowed to be equipped by the owner and clan members)
Killing Spree System (By acquiring kills in row there will be Announcements for 30, 60 & 90 PvP's in row.
By acquiring 30 kills without dieing players will receive Hero Status and an Announcement will show up announcing the Player's name and the achievement of the Hero Status. Also when player dies there will be an Announcement as well that will inform players about his Death and the Hero Status removal. If you do not die you will have the Hero Status until your restart or your exit from our game.)
Advance PvP Feed Protection (In order to avoid feeding PvP's, we've added this system which will stop Players feeding for their PvP count.
If you kill someone more than once in 25 seconds period the PvP won't count and your PvP count will be reduced by 1.)
Solo PvP Zone (Inside Solo PvP Zone names and clan/ally crests are hidden and their names are replaced with their Class name.)
• You cannot speak inside Solo PvP Zone.
• By entering Solo PvP Zone you're auto flagged.
• If you die you will random respawn to 1 of our 4 spawn locations.
Mass PvP Zone (Inside Mass PvP Zone there are no restrictions. You can PvP there with your Clan/Party.
Since there will be small Clans or Parties inside the Mass PvP Zone we've added the Assist PvP Reward System in order to help everyone to get PvP Rewards since our PvP Rewards will be needed for almost everything you'll need on our server when you'll get ready your gear from our Farm Zones.)
Advanced Report System (Includes part of bot protection)
Certifications Skills (On our Server you will have your Certifications Skills on your Sub Classes as well.)
Custom Raid Boss System
Shift click (It allows you to see all the information you're looking for mobs)
Player Shift click (Allows you to see customize panel such as PvP,PK,HP etc, necessary to get bonus before access it)
Archievements System("Farming, Monsters, Epics, Raids" - "PvP, Everything related to PvP - kills, death, etc. - "Clan, Sieges, fortress battles, clan wars, etc." - "Others, Skills, materials, etc." there is level system)