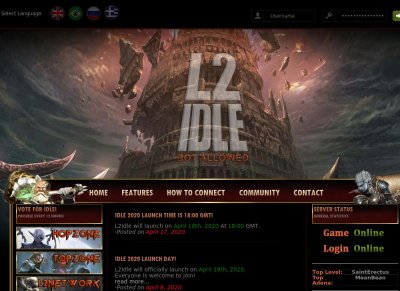 Gameplay:
- Each new character gets NG gear.
- Pre-installed shortcut panel for each new character.
- Players have a x50 weight limit with 250 inventory slots. Private buy/sell shops have 12 slots.
- Subclasses can be leveled up to 85.
- Community buffs will last for 8 hours.
- Unlimited boxes per IP.
- Karma is increased for player killing and Karma will be harder to cleanse.
- Menu with mass functions for convenience in bot farming. Use .bot to open.
- Autoloot is disabled by default. Use .cfg/.menu to turn on if needed.
- Spirit of Idle can be received in Oly, Raid Bosses, Voting, Events and little chance from high-level Chests.
- The resale value of items to NPC shops is 10% of retail stats.
- Gear up to Dynasty can be purchased with adena.
- Shots up to B grade and consumables can be purchased from Community Store.
- Added Billionaire Shop to eliminate the accumulation of tons of useless adena. The items in the Billionaire Shop are almost the same items as in the Pwnz or Spirit Shops. Use trading with players in the game, now it is useful to remember this.
- Offline shops are possible, simply set-up shop and exit game.
- The Auctioneer will have Vesper Armors and Vesper Weapons.
- Retail P. Def, M. Def for Raid Bosses but P. Atk boosted x3. Also P. Def, M. Def will have same stats for each rb (M. Def = P. Def).
- There are no restrictions on the drop from the Raid Boss with a difference of 5 levels. After 5 levels the chance decreases.
- Magic cancel skills removed from all mobs and RBs.
- Hellbound is level 11.
- Custom NPC with teleports.
- Blacksmith of Mammon and Merchant of Mammon are in Giran.
- Dimensional Merchant features unlocked. Now you can use Neolithics to upgrade armors beginning with low S up to Vesper for masterwork.
- Blood Oath and Blood Alliance tradeable.
- Only HP/MP and Vit herbs drop from mobs.
- Low S, Vesper Armor Sets can be equipped by cloak now.
- New custom Epic Bosses, new custom Armor Sets, new custom Epic Jewelry.
- Full list of chat commands in the Community Board.

Olympiad:
- Olympiad one month. Players have 12 hours to claim Olympiad Tokens.
- 6 boxes for start Olympiad, 10 boxes from one IP.
- Winning a match also rewards a Spirit of Idle.
- There is no enchant limit, use what you earn. Sub certificate skills also are active in matches.
- Olympiad jewelry has a 30 days time limit.
- 7 exclusive cloaks only for Olympiad Tokens.

Important Information:
Perhaps for some, it will be a revelation, but there are several parts to High Five client. We using High Five Part 5 exactly. Differences in the clients are in the objects and textures in the game world.
In addition, we use a geodata from an official PTS. It includes all objects from High Five Part 5. If you are using clients from old parts you will encounter invisible objects.
We Highly Recommend using our High Five Part 5 game client, from the site. It already includes our system patch.

Geodata is not perfect that's why we made some tweaks to reduce the likelihood of failure under the texture: control of the player's position relative to the geodata, sliding on the slopes of the mountains.
We also have a no_geo config. If you are using our client and find an invisible object, let us know through the forum or discord with /loc coordinates, not shout the game.
The coordinates of this object will be added to the config so that the geodata does not process this area.